To Whom Belongs The Tiny Pair Of Shoes?

One of the enduring mysteries surrounding the sinking of RMS Titanic 100 years ago concerns a tiny pair of shoes retrieved from the remains of a toddler.

The child’s body was found floating face up without a life jacket in the icy North Atlantic five days after Titanic struck an iceberg and sank more than 700 miles from the Nova Scotia coast at approximately 2:20am on April 15, 1912.

Of the 2,200 people aboard, more than 1,500 perished in horrifying conditions. Only 300 bodies were pulled from the water, including the one of a small boy, who became known as the “Unknown Child” and who was later buried in Halifax’s Fairview Lawn cemetery.

His identity remained a sorrowful mystery until 2002, when scientists using the latest DNA technology and dental analysis concluded the exhumed remains were that of Eino Viljami Panula of Finland, who was only 13 months old when he died at sea.

However, even the best technology can fail, as demonstrated by the Titanic tragedy.

Two years after the official announcement of the child’s presumed identity, a family from Ontario gave a pair of small brown shoes to the Maritime Museum of the Atlantic in Halifax, contending they belonged to the boy. 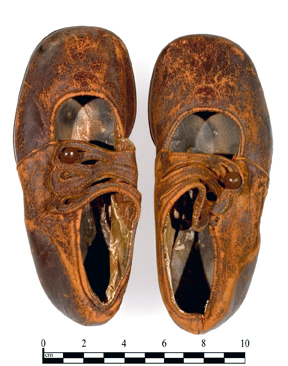 Maritime Museum, Halifax-Pair of Shoes of the Unknown Child

The family told the curators at the Museum that their grandfather, Sargent Clarence Northover of Halifax police, had been responsible for guarding the bodies recovered after the Titanic disaster.

They related that their grandfather had told them that the victims’ families had asked that all clothing belonging to the victims should be burned. But he could not bring himself to eliminate the child’s shoes. He saved them in a drawer in his desk and wrote on the bottom: “Shoes of the only baby found. SS Titanic 1912.”

The museum’s curator of marine history, Dan Conlin, confirmed the story through a check of city records.

But there was a problem.

The shoes were too big for a 13-month-old.

“That made the DNA team wonder about their first conclusion,” Conlin said in an interview.

Furthermore, consultation with clothing and footwear experts revealed that the shoes were manufactured in Britain, not Finland and the coroner’s report included a description of the shoes worn by the child, known then as Body No. 4, which matched the museum’s latest artifact.

Another round of more advanced genetic testing and DNA analysis was conducted on the samples exhumed in 2001. Live Science reported that the newer test gave: “98 percent certainty the identification is correct”.

“It wasn’t the Finnish boy,” says Conlin. “It was an English boy … He fit the shoes, quite literally.”

His name was Sidney Leslie Goodwin. He was 19 months old when he perished in the sinking. 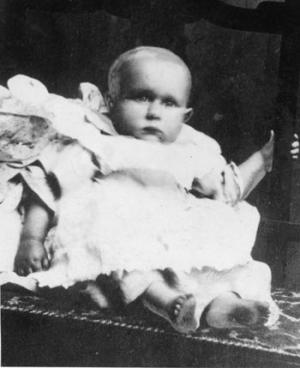 His shoes are now part of the Halifax Maritime Museum’s permanent display.

“A lot of visitors find them very moving,” says Conlin. “It’s one of our most compelling objects from the Titanic … The fact there was once a small person in those shoes really tugs at the heartstrings for a lot of people.”

The youngest of a family of eight who all died in the disaster, Sidney Goodwin was a third-class passenger traveling with his parents and five siblings from England to New York on the Titanic’s maiden voyage.

The boy’s father, Fred Goodwin, an electrician, sought out a better life by moving to Niagara Falls, N.Y., where he had secured a job at a hydroelectric generating station.

Reflecting on this moving story, Conlin warns about the limits of technology:

“Technology can often surprise us and not do the things we expect it to do,” he says. “It’s worth keeping in mind that this is a story about the fallibility of science and engineering.”