Joseph Phillippe Lemercier Laroche was the only black man on the Titanic.

Laroche was born in Cap Haitien, Haiti in 1886 into a powerful family. When he was fifteen, Joseph Laroche left Haiti to study engineering in Beauvais, France. Several years later, he met and eventually married Juliette Lafargue, the 22-year-old daughter of a local wine seller. Despite having an engineering degree, racial discrimination prevented Joseph Laroche from obtaining a high-paying job in France. The Laroches decided to return to Haiti and booked second-class reservations on the Titanic. After the ship struck an iceberg, Joseph Laroche loaded his pregnant wife Juliette and their two young daughters onto a lifeboat. Sadly, he went down with the ship and his body was never recovered. Shortly before Christmas of that year, Juliette Laroche gave birth to their son, Joseph Laroche Jr. 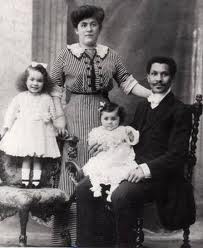