There is a grave in Halifax at Fairview Lawn Cemetery where some of the Titanic victims are buried, which bears the number 227 and the name: “J. Dawson”. For years it was just another name, a headstone and a footnote….until the blockbuster 1997 movie Titanic. James Cameron said that he was not aware of the Halifax tombstone engraving with the name of the movie’s hero, until after finishing his Titanic screenplay. The endearing character of the movie, Jack Dawson played by Leonardo Di Caprio broke more than the heart of his equally fictitious sweetheart and first class passenger Rose DeWitt Bukater portrayed by Kate Winslet.

A modern generation of young females grieved for the young vagabond and allowed their tears to blur their perceptions of reality. The tombstone of “J.Dawson” at Fairview Cemetery in Halifax suddenly became a huge tourist destination and a focal point for adolescent emotion. Smitten by the romantic myth, admirers left flowers, notes, personal photographs, ticket stubs, even… hotel keys.

But, who was the real J. Dawson?

In reality, he was Joseph Dawson, 23, from Dublin, Ireland and he came to Southampton, England to look for work. He joined the Titanic as a coal trimmer in the boiler room and perished in the sinking. His body was recovered (#227) and he was buried in Fairview Lawn Cemetery, Halifax, N.S. on May 8, 1912. 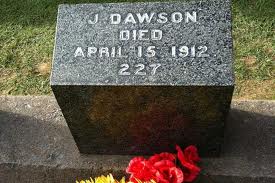