With mild trepidation albeit greater conviction, I booked a last minute round trip ticket from New York to Halifax this past weekend. After landing, I hopped in a taxi asking the friendly driver to stop at a flower shop on my way to the Mount Olivet Cemetery. While he was patiently waiting for me outside the store, I fretted over what kind of flowers to lay at my ancestor’s grave. For a moment, I thought of purchasing beautiful white orchids, which would last longer after I had left. Wondering if orchids existed in northern Lebanon, I opted to play it safe and get white and yellow daisies, reminiscent of the wild marguerite flowers found in my great grandfather’s village of Thoum.

As I arrived at the Mount Olivet Cemetery, daisies in hand, I walked towards the plot where the 19 Roman Catholic victims of the Titanic laid to rest. A tour guide addressing a group of about 20 people was standing just behind tombstone # 312 with the engraved name of my great grandfather: Youssef Gerios.

Hearing the drum of my own heartbeat and overcome with emotions, I kneeled in front of my great grandfather’s tombstone with tears rolling down my face.

Standing behind me, I could sense the surprise of the tour participants, astonished by how ingenious the tour operator was, to include in the visit, a very realistic re-enactment of a bereaved Titanic family member!

After a moment of reflection and prayer, one of the group participants gently asked me about my connection to the Titanic victim. “This is my great grandfather”, I replied. The surprise on the woman’s face and the interest generated by my response would be the first of many similar reactions during my weekend journey to Halifax. The kind lady then proceeded to comfort me by stating that she often came to Mount Olivet Cemetery and now that she knows about Gerios Youssef, she was going to look after him. She patted his tombstone like one would pat an old friend’s shoulder and quietly walked away leaving me to my own thoughts. 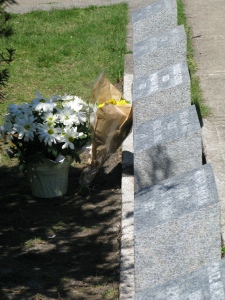 Another younger gentleman of Greek origin was curious and inquired about my presence. Noticing that the engraving of the name Youssef Gerios had somewhat faded away, he suggested I sprinkle some pulverized white chalk left at the base of adjacent tombstones. Grateful for his clever advice, I scraped bits and pieces of remaining chalk in an effort to highlight my great grandfather’s name. Mission accomplished, we chatted and before leaving, he respectfully asked if he could take a picture of me in front of Gerios’ grave, to show his wife he had met a descendant of a Titanic victim!

And so it was, a recurrent theme in Halifax this past weekend, meeting complete strangers, who showed compassion and great interest in the story of my great grandfather who perished on the Titanic. Besides, noticing that Gerios’ grave stood between Titanic victims John. F. P Clarke, the ship’s notorious Bass Violist, Henri Jaillet, a French Pastry Chef and a few other ladies, I felt comforted that he was in good company.

Before leaving Mount Olivet, I sat quietly by my great grandfather’s resting place. I felt the weight of history and reflected on the spiritual magnitude of ancestral legacy.  A quote attributed to Saint Charbel, a revered Lebanese monk and hermit, who lived in the mountains near Gerios’ village, came to mind.

(In silence and solitude, one only hears the essential).

In that moment of solitude at Mount Olivet and echoing the sentiment of all his descendants, I felt compassion, pride and deep gratitude for my great grandfather.

2 comments on “A Visit To Mount Olivet Cemetery In Halifax, Nova Scotia”